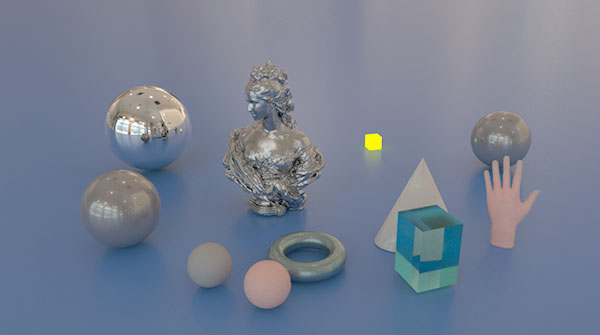 Assembly couldn’t be easier: All passes are merged with PLUS, the sum is the original beauty

The order of nodes in a plus-operation is irrelevant

In the above example, none of the passes have an alpha channel, therefore default Merge operation OVER would work as well

In most cases, we will render layers, i.e. foreground layer on black with alpha channel

Renders on black are usually premultiplied 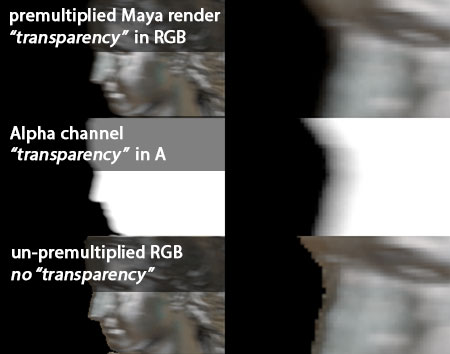 Premultiplied
Simply put, any semi-transparency in the alpha, even one-pixel anti-aliasing, has already been applied to the RGB channels in the premultiplied image

Why is this relevant?

Color correction of premultiplied images create a number of issues

The most obvious: Lifting the blacks will cause the image to not be properly premultiplied anymore – a premultiplied image has to have a fully black background. The default Merge operation OVER will not work anymore as the lifted blacks are plus’ed over the entire background

(More examples on the premultiplication page)

Without alpha, there’s nothing to multiply or divide with 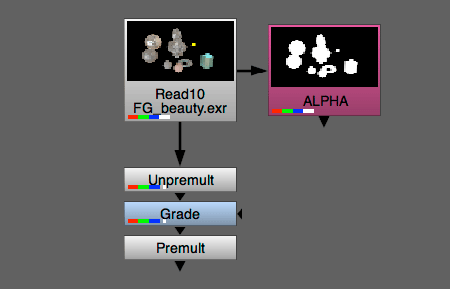 Alpha channel is required, here embedded in the beauty

Per default, render passes are set to RGB and have no alpha channel

Only the beauty is set to RGBA and comes with alpha 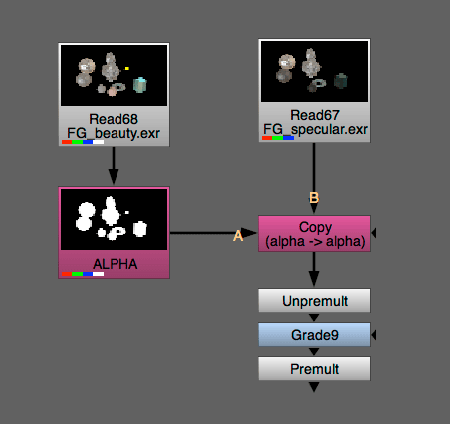 If render passes have no alpha, we need to add the alpha to the render pass before Unpremult

Copy node takes the alpha from input A 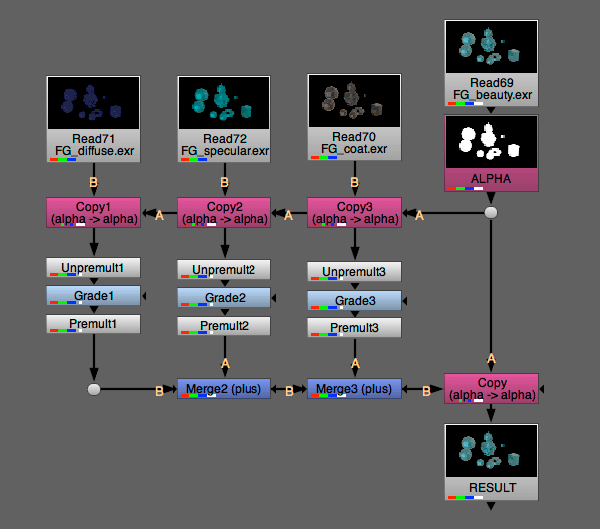 Concluding, we need Copy and Unpremult for all render passes before color correction

This setup works as long as alpha and render pass match

Here they match because the material is visible in all passes

Alpha has to match render pass

Below example will not work correctly. All object are visible in the alpha channel, but objects vary in the material passes

Lifting the blacks in the Grade node i.e. of the Diffuse pass, which has only two objects, causes blacks of all objects to be lifted, see GRADE_RESULT node. The Premult after the Grade is not working correctly because the alpha includes objects which are not in the diffuse pass 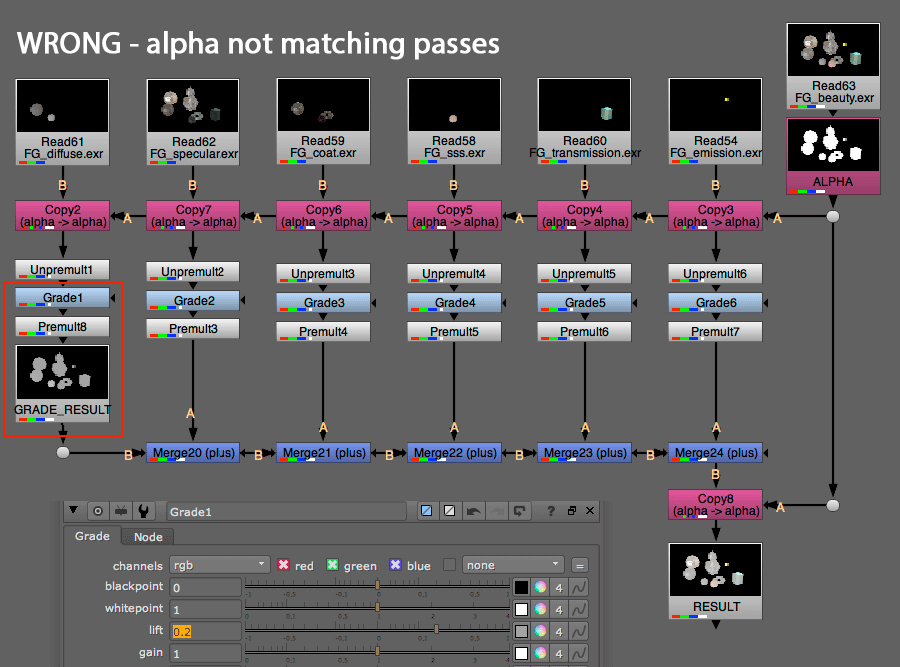 Additional RGB mattes rendered from Maya are very useful. They allow to access every object individually, or in below example to create the missing alpha channels

The RGB mattes are shuffled in new layers (channel-sets), which are merged into the passes and then accessed with the expression node to build the alphas

Note that the GRADE_RESULT is good now, the Premult node works with the correct alpha

The plus operations merge alphas from all passes together, means the final alpha is rubbish. Important to copy the original alpha into the result after plus’ing the passes 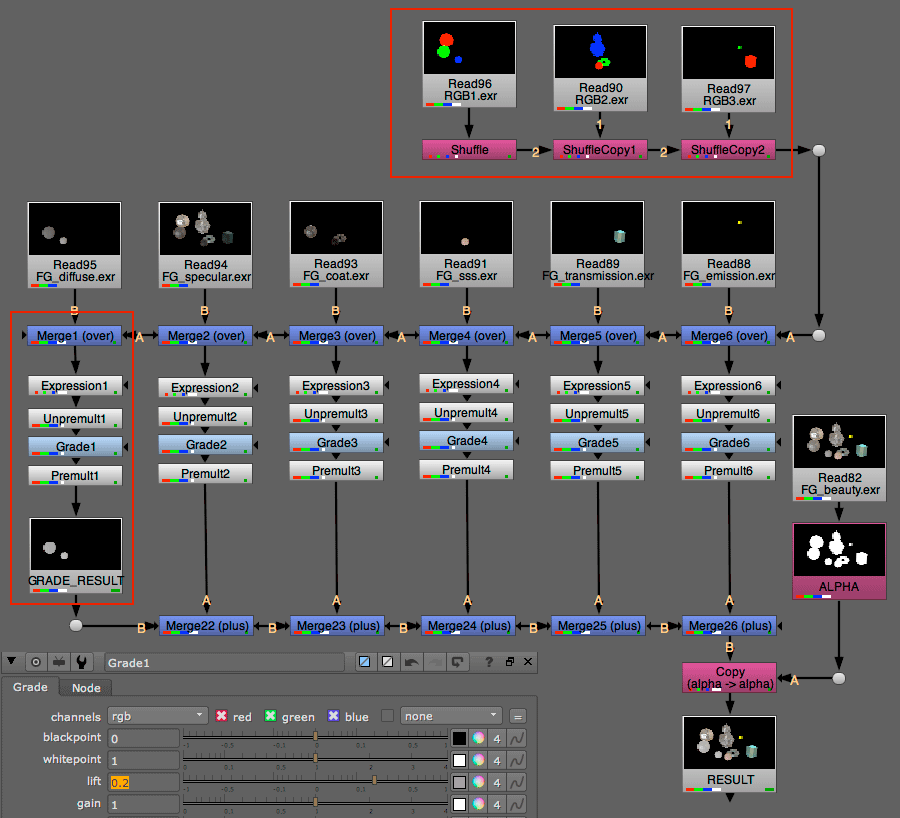 1 – This is what we need, alpha for the diffuse pass, created from green + blue of RGB1

3 – Assign a name for the new layer, i.e. the name of the matte pass

Use short names, need to type them into expressions nodes later

The Merge node should only add the layers, not change the RGB of B input, thus we set A input to none

The last row is the default for the alpha output

The second Expression is just another example, from the specular pass of my setup 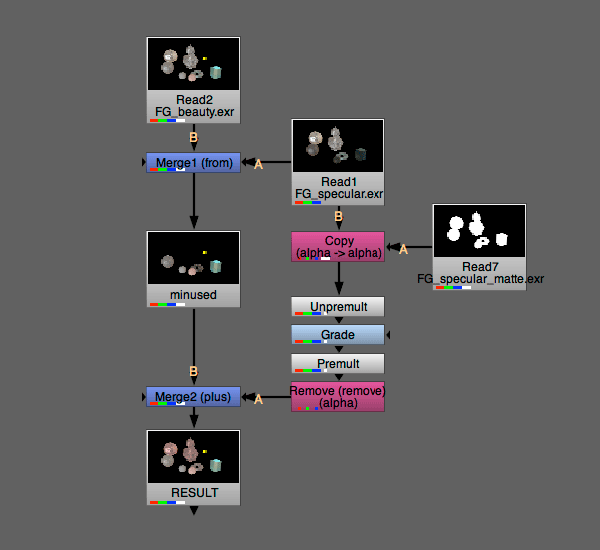 Instead of PLUS’ing passes together, we could also use the MINUS operation to change one pass

In this example, the specular pass is first substracted from the beauty, graded and then added back to the beauty

The Merge node operation from is simply B-A